With swinging, panting and celebrating ended the last day of filming in ,,Mlynkojc broznja“

In September, the 360-degree film about the cultivation and processing of flax will have its premiere at the Jänschwalde Museum of Local History.

The Peitz Culture and Tourism Office initiated the production of a 360-degree virtual reality film showing the path from the flax stalk to the linen wall, following on from the thematically corresponding exhibition in the Wendish-German Heritage Museum in Jänschwalde. The project was one of the ideas that received funding last year in the „Cultural Heritage Lusatia“ competition. Nadine Adam, director of the Jänschwalde museum, organized the implementation of the film project. As a technical expert, the multi-award-winning Cottbus virtual reality filmmaker Walter Schönenbröcher was entrusted with the filming – which came to a successful conclusion last Saturday. 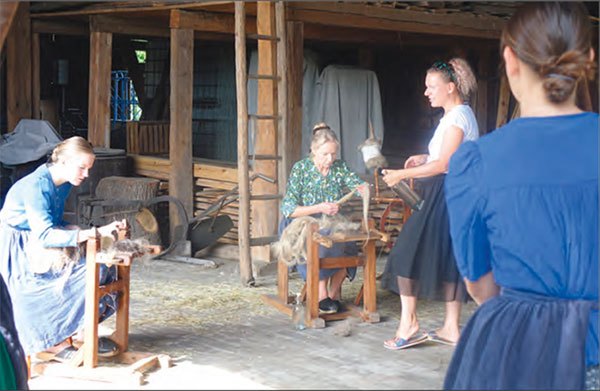 „I do a lot of projects, after all. But this is the one I’m having the most fun with right now,“ explains Walter Schönenbröcher on that last day of filming, on which two scenes in the old barn of the Müller family in Jänschwalde) came into the „can“. As special challenge he and Nadine Adam call the necessary „time travel illusion“, because it is to be represented, how the flax was cultivated and processed approximately hundred years ago. Walter Schönenbröcher had to retouch out power lines, wind turbines and, last but not least, the Jänschwalde power plant in the outdoor scenes on the Friedrichshof in Jänschwalde. In the outdoor scenes, by the way, the lunch lady also makes her appearance, portrayed by Walter Schönenbröcher’s wife Kathrin Jantke. Eleven scenes were shot for the film over ten days. More than 20 extras of different age groups were involved. Those two scenes shot on Saturday show the following: First, the swinging of the flax as well as the panting in the next step, finally the scene after the harvest, where old and young celebrate the successful harvest with food and drink and Wendish singing. In these two scenes, as well as in some of the previous ones, the person who owns the barn used as a filming location also took part: Werner Müller, former teacher at the Lower Sorbian High School. 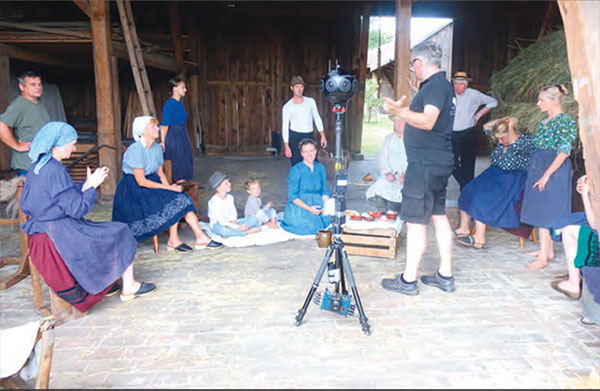 „I used to experience traditional flax processing with my grandparents in Jänschwalde Ausbau. But I didn’t know anything about it, in the course of the filming we got to know it better“ he said. Among others, the sisters Annelie and Susann Adam took part as actresses in Wendish working costumes. The latter swung the flax, the former panted it. Two weeks earlier, Annelie also appeared in the pseza, the spinte scene shot on the premises of the museum, for which the winter season was recreated in the middle of summer. During this, she conversed with Diana Schuster in Wendish, and Wendish Easter songs were also sung. The film will be shown in German, Wendish and English versions. At its premiere on September 19, at the Museum Night, there will initially be only the German version. Five VR glasses will be available to museum visitors in the future for this technically sophisticated lesson about flax. J.-F.K.