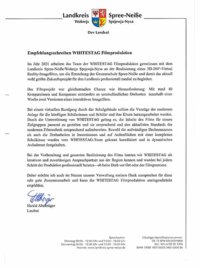 In 2021, the WHITESTAG Filmproduktion team worked together with the district of Spree-Neiße/Wokrejs Sprjewja-Nysa on the realization of a 3D 360° virtual reality image film to professionally accompany the creation of the Spree-Neiße Comprehensive School and thus what is currently probably the largest future project for the district.

The film project was both an opportunity and a challenge: With around 40 extras, two versions of an interactive image film were created at different filming locations within one week.

A virtual tour of the school building was to highlight the advantages of the modern facility for future students and their parents. Thanks to the support of WHITESTAG, we succeeded in making the content of the film suitable for our target groups and in presenting it in an appealing way that met the latest standards of modern film technology. Both the elaborate drone scenes and the filming indoors and outdoors with a complete school class were skillfully coordinated by the WHITESTAG team and captured in dynamic shots.

During the preparation and entire realization of the film, we got to know WHITESTAG as a creative and reliable partner from the region and received professional advice at every step of the production – whether during the shoot on location or the film premiere.

Therefore, I would like to express my thanks also on behalf of our administration for this very good cooperation and can recommend WHITESTAG Filmproduktion without reservation.

Recommendation of the district Spree-Neiße