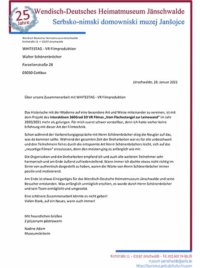 To unite the historical with the modern in a special way has been more than successful with the project of the interactive 360degree 3D VR film „From the flax stalk to the canvas wall“ in 2020/2021. Hard to imagine for me at first, because I had no previous experience with this kind of film technology.

Even during the preparatory discussions with Mr. Schönenbröcher, my curiosity about what was to come grew. During the whole time of the filming, it was easy for everyone and the participants found it easy to get involved in the „new kind of filming“ due to Mr. Schönenbröcher’s relaxed manner because most of them initially felt the same way as I did.

I and all the other participants found the organization and the filming very harmonious and in the end extremely satisfying. Whenever I thought I had not portrayed something correctly in the sense of authentically, Mr. Schönenbröcher’s words were always positive and motivating.

In the end, something unique was created for the Wendish-German Museum of Local History in Jänschwalde and its visitors. What seemed impossible at the beginning, was made possible and realized by Mr. Schönenbröcher and his team.
There could not be more beautiful cooperation! Thank you very much, see you again, whenever!

Recommendation of the Wendish-German Museum