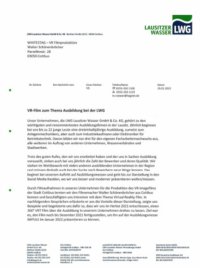 Our company, LWG Lausitzer Wasser GmbH & Co. KG, is one of the most important and renowned training companies in Lusatia. Every year, up to 22 young people start a three-and-a-half-year apprenticeship with us, mostly as plant mechanics, but also as industrial clerks or electronics technicians for industrial engineering. Of these, we train only three for our own skilled workers, all the others on behalf of other companies, water associations and municipal utilities.

Despite the good reputation we have earned and which precedes us in terms of training, the number of applicants and their quality are also falling every year. We are competing with many other training companies in the region and therefore have to find new ways of recruiting applicants. This starts with our appearance at training fairs and extends to our presentation in social media channels, where we want to/must present ourselves in a better and more modern way.

Through filming in our companies for the production of the VR image film of the city of Cottbus, we got to know the filmmaker Walter Schönenbröcher from Cottbus and dealt more intensively with the topic of virtual reality film. In subsequent discussions, he explained the advantages of this presentation, showed us examples and got us so enthusiastic about it that we decided to have a 360° VRT film made about training in our company in the fall of 2021. The goal was to complete the film by December 2021 so that it could be presented at the IMPULS training fair in January 2022.

Despite the short notice of the request, Walter Schönenbröcher was immediately willing to cooperate with us and produce the film by the desired date. Due to the already existing VR film footage from the company, but especially the good contacts between him and our representatives, especially from the apprentice workshop, we decided to shoot this VR film with WHITESTAG.
The cooperation with Walter Schönenbröcher was very constructive, cooperative and uncomplicated. In a very short time, we were able to create a script together, find protagonists, write the texts and quickly arrange shooting dates. Even on these dates, the cooperation was very collegial and the atmosphere was open-minded and friendly, so that the participating trainees had fun, worked with concentration and we were able to keep to our tight schedules.

The constructive cooperation also continued during the editing of the film. Walter Schönenbröcher realized all the necessary work very quickly and was in constant contact with us to incorporate our wishes. He also suggested further uses for the film footage (e.g. for YouTube), which we gladly accepted.

The result is a very successful and informative 360° VRT film about the training, a YouTube contribution and numerous other possibilities to use the film footage for our advertising purposes. We are already looking forward to showing the 360° VRT film with the corresponding VR glasses at our trade fair stand and thus being able to interest the young people in our stand, our company and above all in an apprenticeship with us.

Recommendation of the LWG Lusatian Water